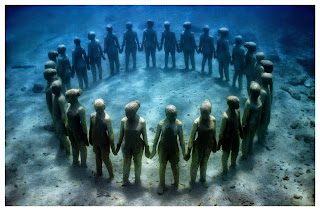 Phil Saye, owner of Dive Grenada, is leading the action group for the regeneration and the future development of Grenada's very unique Underwater Sculpture Park. The park is ideal for both snorkellers and divers and lies in a beautifully scenic bay along the west coast of the island.

The underwater Sculpture Park was originally designed by Jason Taylor, an English sculpture and personal friend to Phil. It was created in an effort to reduce the environmental pressure from diving and snorkelling on other sites in the Marine Protected Area.

To begin his attempt to regenerate the park, Phil Saye has begun to 'clean up' the area. He has removed some pieces of sculptures that were not savable and dug up those that were buried by sand, such as Grace Reef. He is also in the process of organizing new and more sculptures to be placed among the park, which hopefully, with the help of the public and authorities will become a reality and rejuvinate our marine life.

For more information and pictures, visit www.divegrenada.com
Posted by Unknown at 11:01 AM